This project was a helmet mounted display for the MBB105 helicopter.  The display had some HUD function but was also slaved to the under mounted gun.  As the pilot's head moves, so the gun under the helicopter moves with it, and the optical system identifies hard edges of vehicles and buildings for targeting. 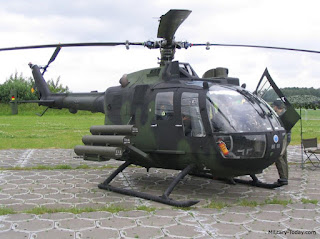 MBB Bo 105
We take this stuff for granted today but back then (the late 80s) this was cutting edge military technology.  Now, your cell phone camera identifies faces, even as your subjects move around. It's basically the same technology, in a phone!
My part in all of this was again, the analog interfaces for the display itself. In this case the analogue card was shrunk down into a module, that would be mounted to the board. This meant we used all new devices, a lot of surface mount which was very new technology at the time. It presented a whole set of new challenges and that's what made this project fun.
Email ThisBlogThis!Share to TwitterShare to FacebookShare to Pinterest
Labels: GEC Marconi
Newer Post Older Post Home